How to Make a Retro Space Pistol in Photoshop The space race between the Unites States and the Soviet Union gave rise to steady stream of radio programs that glamorized adventure and exploration of the cosmos.

This fueled demand for science fiction themed books, magazines, and consumer packaging — all in need of eye-catching illustrations.

Making these kinds of illustrations isn't as hard as you think. The pistol is made of simple shapes (squares, circles, and triangles) and a three color palette.

Follow along with these easy tutorial and create a great looking sci-fi illustration fast!

Mid-Century designers often used solid blocks of color with which to build the rest of their design. Using built-in Photoshop tools such as the lasso tool alongside Form Build 004 from SpaceRanger, Brad is able to create the main part of his design quickly and easily.

Another hallmark of Mid-Century design is texture and shading (or sometimes texture as shading.) Dry brush textures and details created using basic shapes help give complexity and visual interest to an otherwise simple design. Brad uses Shading Brush 003 for, what else, shading!

Tip 💡 : SpaceRanger include clearly marked brushes for their suggested use, but try experimenting to take things to another level and uniqueness.

Take your art to the moon!

With the SpaceRanger Brush and Tutorial pack you not only get all the Photoshop brushes used in this tutorial, but three more in-depth step-by-step tutorials to up your illustration game! 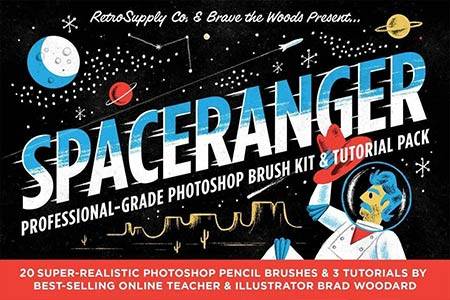 Out of this world Textures!

The SpaceRanger Brush Pack is a perfect kit for creating classic children's illustrations with bold shapes and gritty analog textures.