Halftones are one of the defining characteristics of bygone printing of the Mid-Century.

To understand how we decided which packs to include it's helpful to understand a little about what halftones are.

Halftone is a reproduction technique where the tones or value of an image are made with dots or lines of different sizes or distances (sometimes both!)

They were originally used as a way to reproduce photographs, but have found their way into other areas of printing as a cheap and easy way to print.

Halftone printing became so popular in the early to mid-20th centry that it's become associated with those decades.

Here is our list of the 5 best Procreate halftone packs based on quality, authenticity, and ease-of-use. 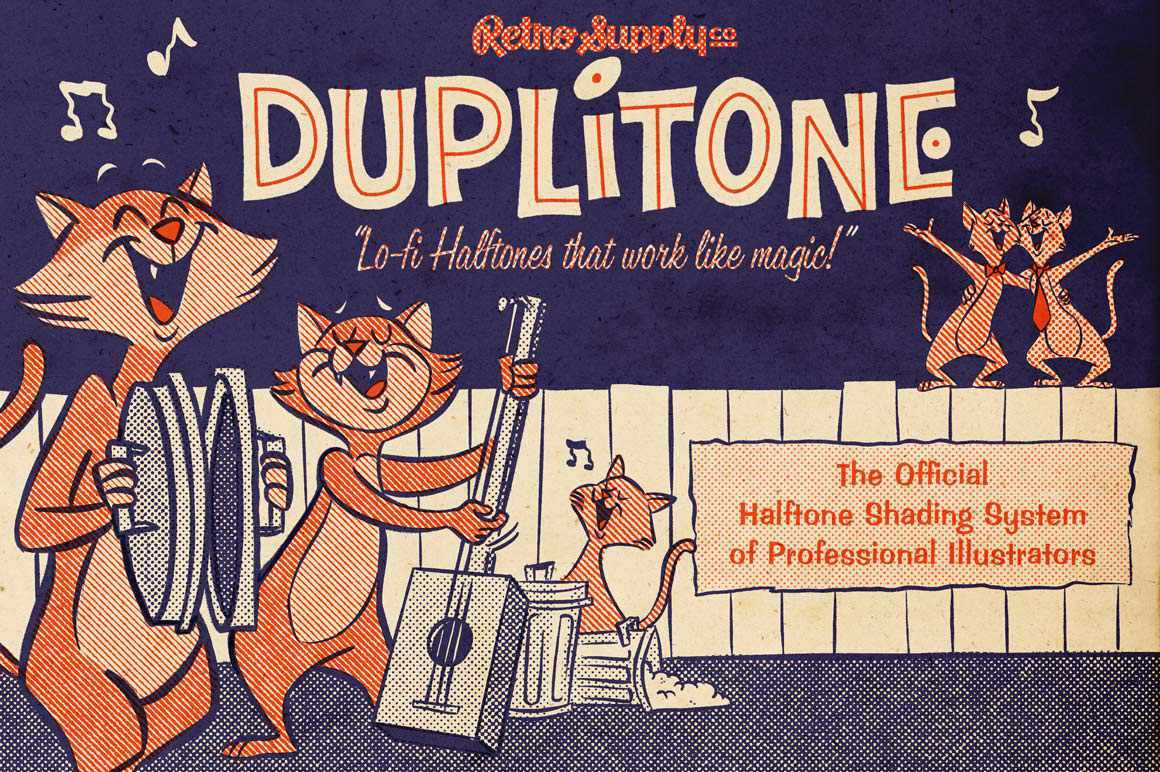 Created by RetroSupply Co., DupliTone is a powerful set of 108 dot, line, and shader brushes in both clean and lo-fi texture versions.

Artists will appreciate the full tonal range of brushes. Deal hunters will love the huge amount of tools and bonuses at a reasonable price. Each brush seamlessly blends into the others which means no weird blending or mistakes.

Those just getting started with halftones may find the large number of options overwhelming. However, RetroSupply Co. has provided multiple tutorial videos both within the pack and on their YouTube channel to make the most of this product. 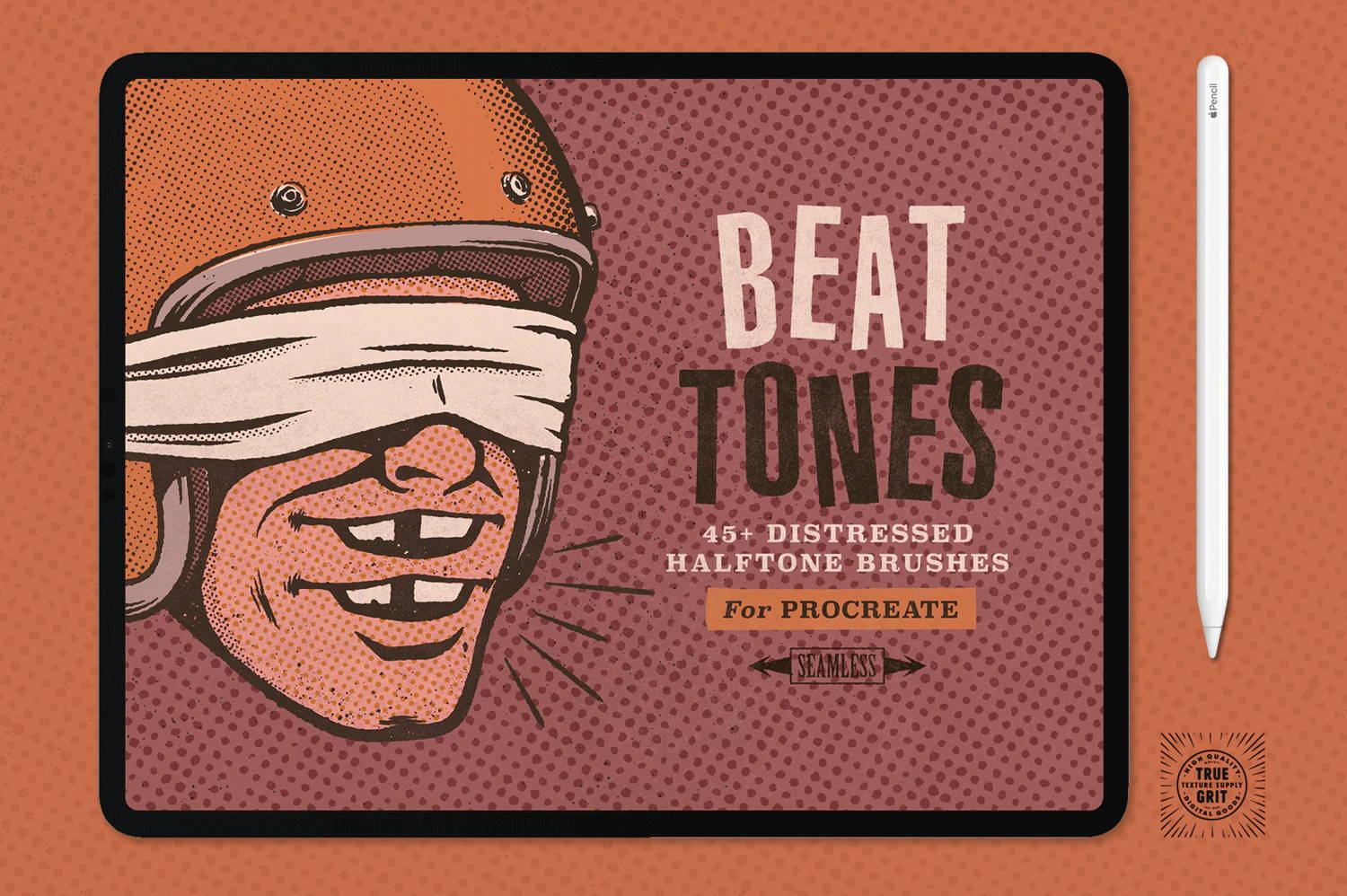 The alternate screen angles available make it a unique set for artists who are heavy into halftones and would want that for their work.

Artists just starting out with using halftones will appreciate the inclusion of a tutorial video and user guide. The inclusion of line halftones in both angled and horizontal versions work well for cross hatching.

Users will want to be aware of possible overlap when moving from lighter to darker tones as a possible drawback. 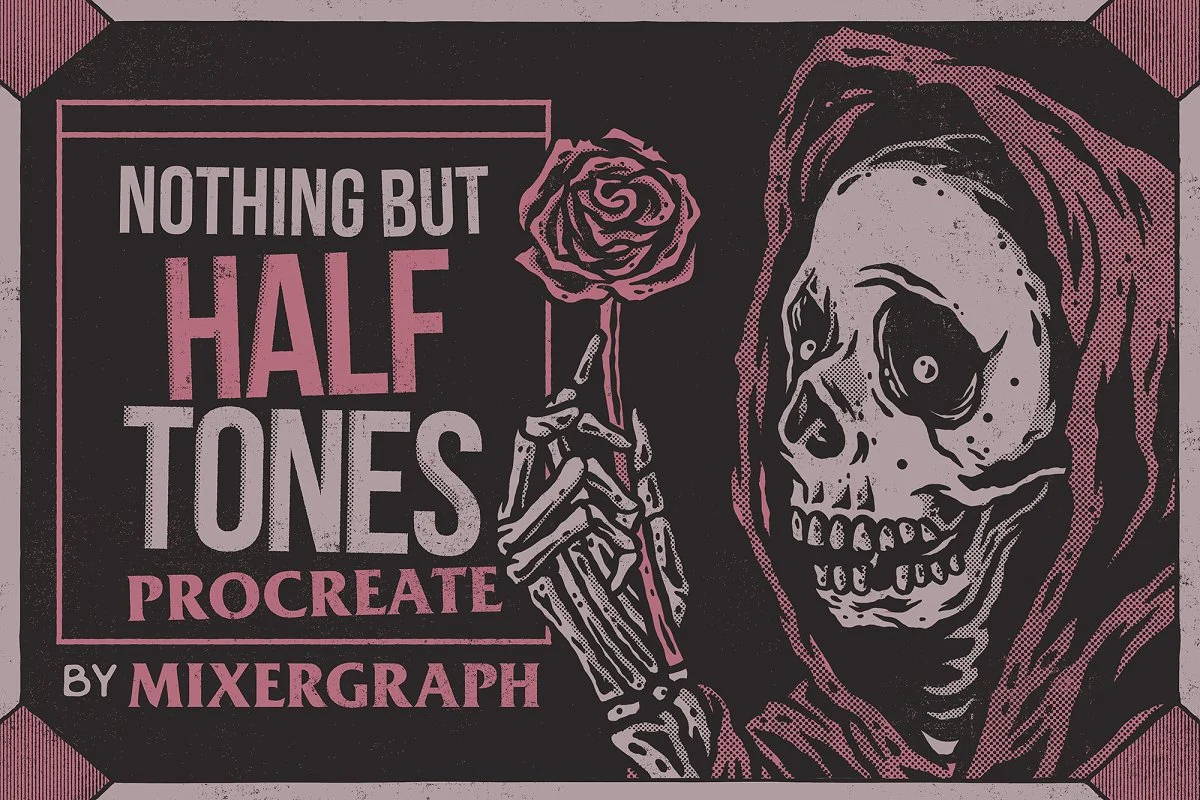 Created by artist and designer Mixegraph, Nothing But Halftones is a small but sweet collection of 9+ halftone brushes meant to imitate a classic retro screen printing look.

Grunge lovers will be impressed with the heavily textured brushes. The pack also includes line brushes that you can layer for unique effects.

Users who are used to more robust brushes may struggle with the sparse options, but those just getting started with halftones will find it to be an easy introduction. 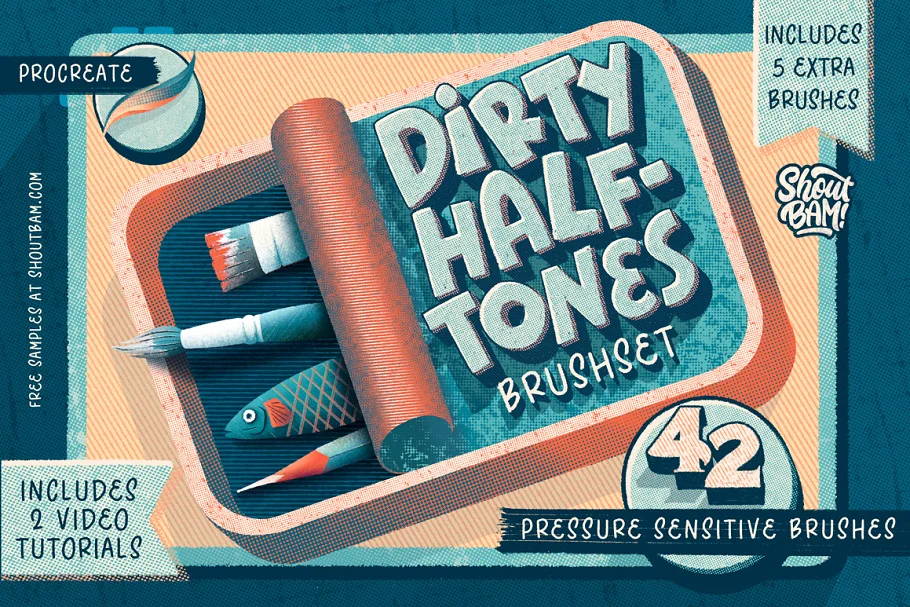 Sampled from real life examples of halftones in the wild, design studio Shoutbam provides a collection of 42 pressure sensitive, “texturizer”, and sprayer brushes.

The pack includes a unique collection of clean and grungy textures that can be applied in a variety of ways to your art.

Halftone aficionados may not consider some of these brushes to be “true” halftones, but we appreciate the spirit of the pack in creating vintage inspired artwork. Beginners will find this a fun introduction to halftones, with a manageable size of brushes and interesting textures. 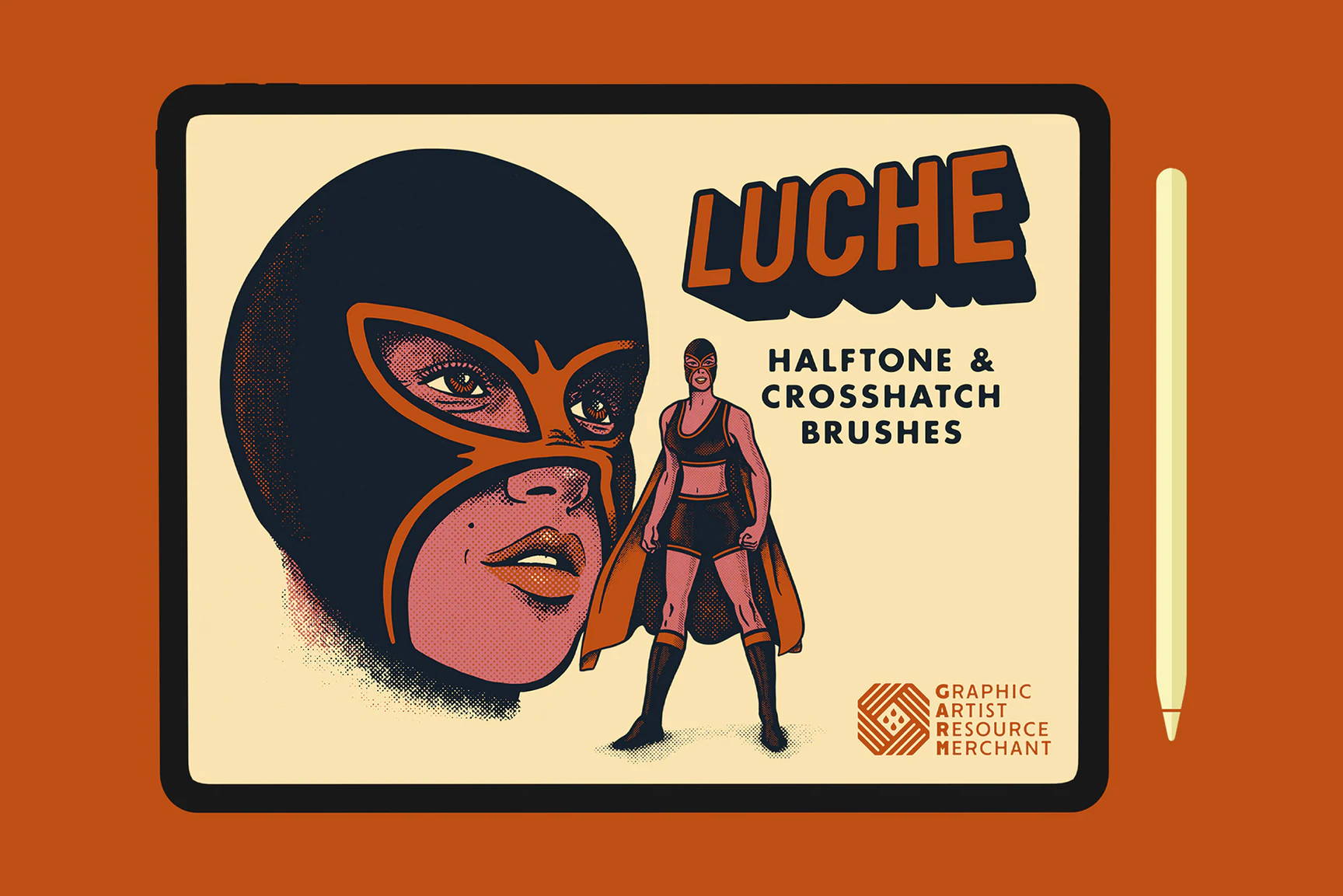 A unique quality of this brush collection is the ability to manually build tonal ranges for an etching or cross hatch look along with the classic dot halftone.

Some users may find the limited, out of the box, tonal ranges limiting. While others may appreciate the level of control available through this technique.

Conclusion: Which halftone brushes are best?

Your needs will be unique to you, so it may seem like there's no clear winner. We broke down each option by tonal range, texture, brush types, quality, affordability, etc.

So which is best? We believe DupliTone by RetroSupply Co. is ahead of the pack. Other products offer similar options or have fun, unique features.

However, the full tonal range of the DupliTone halftones, combined with the fact that they are entirely seamless, makes them an excellent choice for Procreate users of all types.

But what do you think? Let us know your favorites!

Other Articles We Think You'll Enjoy 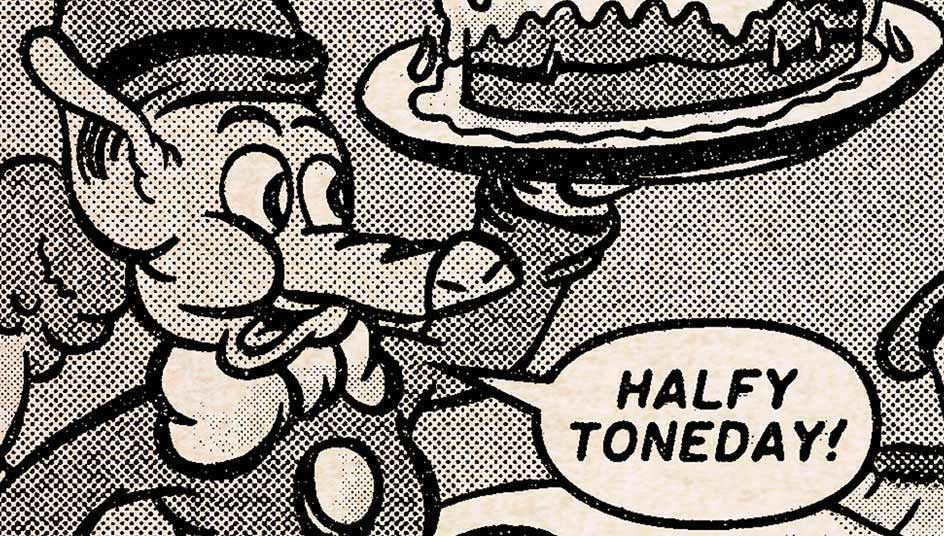 Setting the right tone | The history of halftone printing 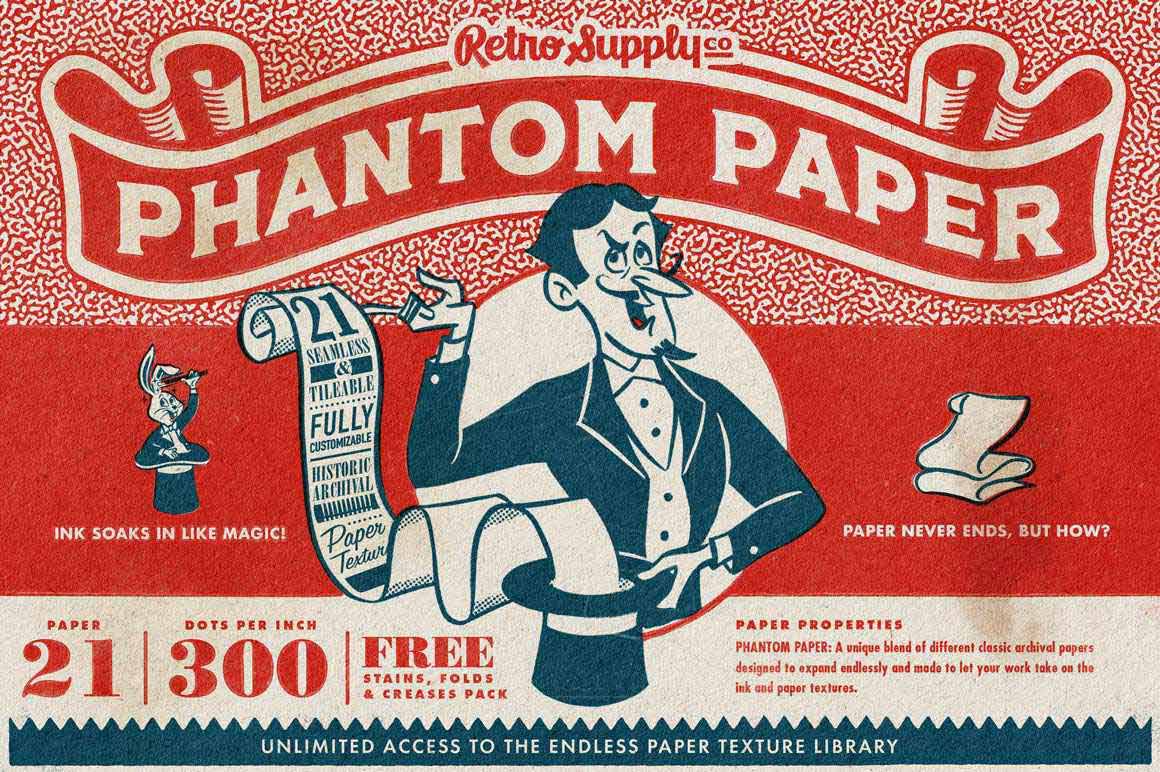 The 5 best Paper Textures for Procreate

Paper textures have become a favorite for new and veteran digital artists alike. The rise in quality makes them attractive for a wide variety of uses. But which one do you pick? We've put together the five best paper textures available for Procreate. No matter your preferences, you're sure to find something you like on the list. 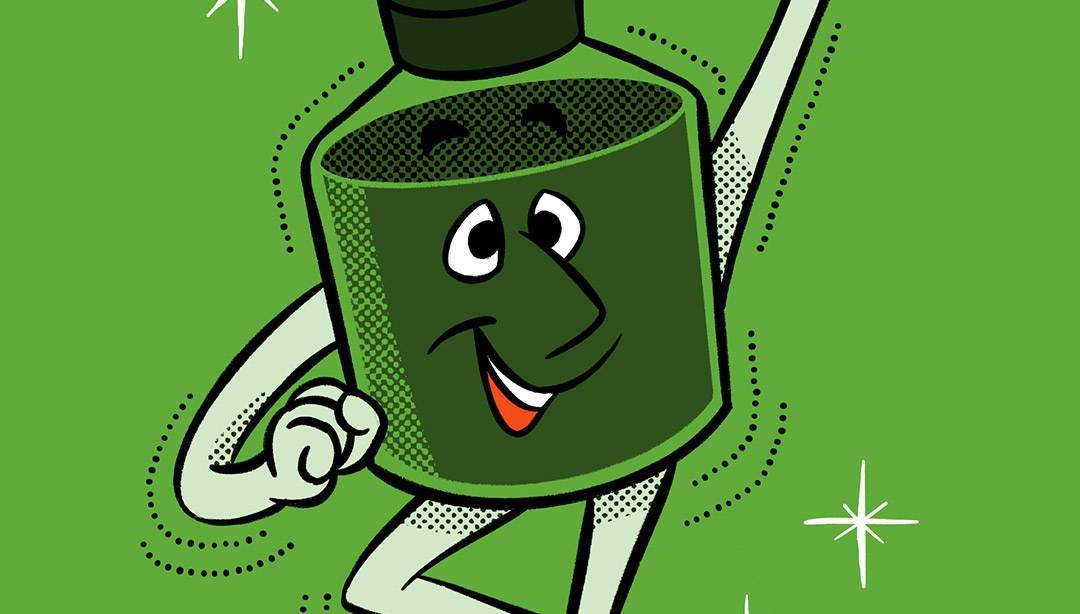 Learn how to use clipping masks, layer masks, and alpha lock in this easy to understand tutorial for Procreate. Discover the difference between each type of mask and the pros and cons of each type of mask. This article includes plenty of visual examples and animated GIFS to demonstrate concepts.