How to Make a 19th Century Inspired Logo Etched engraving logos, letterheads, and billheads were commonplace in the 19th century. If you were a merchant in those days, you were likely using it for all your business paperwork.

Have you ever wondered how to make a logo inspired by this time period?

In this tutorial, I’ll be showing you how to create a logo like this in Illustrator with a little help from Photoshop. In addition to these examples from my personal collection, I searched Google and found a few more and set them off to the side of my Illustrator artboard.

Now, if you spend much time looking at vintage billheads you’ll notice they have a bit of gray and muddy look due to all of the linework shading. For this logo, I wanted more of a light and airy quality, which meant some adjustments would have to be made. After all, this is a logo for fresh seafood.

Below is a step-by-step of how it all came together.

After my initial conversation with the client, I had a pretty clear direction of where this design needed to go. I did a handful of pencil sketches and then turned to Illustrator to block out the rough shapes shown here. With the basic shapes created, I began creating the curved shapes by using Envelope Distort Warp (CMD + Option + Shift + W) with these settings:

I then used the Shear Tool to move it back into alignment with my circle shapes. I set my top type layer and then duplicated it using Copy (CMD + C) and Paste in Place (CMD + Shift + V) to create the white, black and gray drop shadows. I made a second copy using the same Copy (CMD + C) and Paste in Place (CMD + Shift + V) method, then holding Shift, moved it over and down a few pixels (holding shift helps you maintain a 45º angle).

Next, using the Blend Tool (W), I filled the space between the two lines of text. Shown above in blue with a single step in the blend, I adjusted the steps to 35 so it would appear to be a solid transition. However, this was only to establish the look.

For the final, I replaced the blend with individual solid shapes. More on that in a minute. After converting the blend to white, I copied and pasted that group two more times Copy (CMD + C) and Paste in Place (CMD + Shift + V) to make the black and gray drop shadows, offsetting each one at slightly and using Send to Back (CMD + Shift + [) to create the final look. Then, I placed a copy of the finished type off to the side of my artboard and distorted it using the same method as when I created the curved shapes above.

Note: Get into the habit of keeping copies of your steps. It will save you a ton of time if you ever need to go back to adjust something.

Next, using the Pen Tool (P) I drew some lines for the subordinate copy blocks, set the type with the Text on a Path Tool and switched the alignment from Rainbow to Skew, which is found under the Type Menu. Next, I drew out the life preserver. Using the Ellipse Tool (L) I drew two circles for the inner and outer rings. With the basic shape formed I added four rectangles using the Rectangle Tool (M), rounded off the corners using Live Corners and then added the textured lines and rope.

Grave Etcher | Vector Engraving Brushes worked great. I simply drew a couple of circles and added the stroke. The rope texture was next. It’s a freebie brush I found with a Google search. Sorry, I didn’t save the site, but it should be pretty easy to find.

The helm followed. Again, drawing a few circles with the Ellipse Tool (L). Then, drawing the handle and spoke using the Pen (P), Rectangle Tool (M) and Live Corners. The shapes were all created with white fills and black strokes.

The black etching inside was a series of slim triangles along one side. After the triangles were drawn, I used a Clipping Mask (CMD + 7) to hide the ends.

The bird silhouettes and wave followed. For time and budget, those were purchased from stock art. The decorative linework and banner tails were then drawn with the Pen Tool (P).

IndustryPress is a great Photoshop Brush Pack to create this look. I followed the instructions that came with the pack, loaded everything into Photoshop and placed a copy of the Illustrator art onto Photoshop layer for reference.

IndustryPress is a set of Photoshop tool presets that allow you to get intricate engraved line work from the late 19th century with ease.

Great for creating convincing 1870s engraving inspired design or for adding line and crosshatching to shade your work. 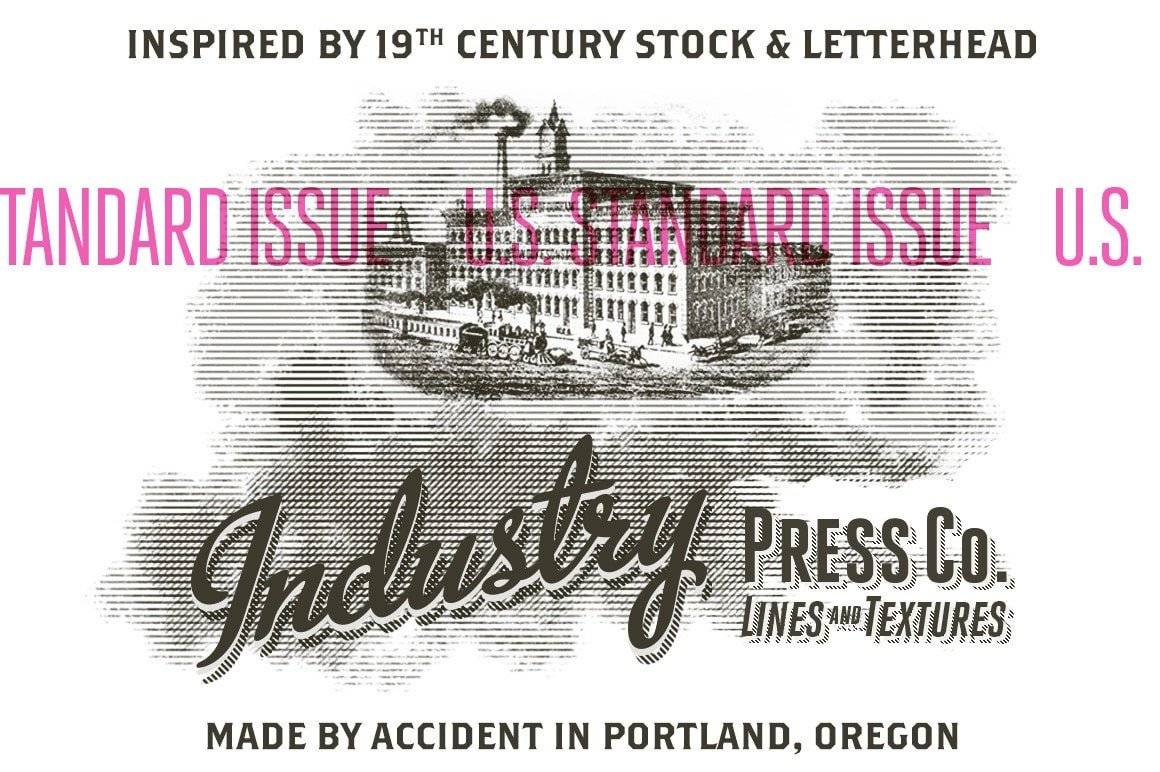 Next, I created additional layers and started building the clouds. I highly recommend placing each brush on a separate layer and building clouds gradually. This way you can move, erase, etc. without disturbing your other work.

The center sun is a circle with a Gradient Fill:

Note: I used this same technique on the subtle white glows behind the life preserver, helm and background.

The next step was to create an art brush for the light rays. It starts by drawing a circle with the Ellipse Tool (L), then using the Direct Selection Tool (A) delete the far left point.

Now create a new brush by dragging the shape onto the Brushes Palette:

Then, I drew a line with the Line Segment Tool (\) and applied the brush stroke, followed by creating groups of lines with varied lengths, one with five lines and one with three.

Next, I positioned a group at the top and bottom of my sun and used the Rotation Tool (R), set the angle to 20 degrees and hit copy.

Then using Transform Again (CMD + D) several times, I stepped the grouping all the way around the sun. I repeated these same steps with the group of three and offset those by 10 degrees to complete the sunburst.

Since this logo has a lot of pieces, I wanted to take some steps to reduce the file size a bit.

They first set of type drop shadows was created with a blend.

For the final I made solid shapes for each letter by cloning each letter to match their position, then drawing connecting shapes with the Pen Tool (P) and lastly merging them with Pathfinder Unite (keep in mind, I still have a set of live text off to the side of my artboard if I ever need to go back.).

I repeated these step for each letter of the main name. Once complete, I used these finished solid shapes to create the black and gray drop shadows.

First, it allows the edges to be crisp, it helped reduce the file size.

Second, it allowed me the opportunity to tweak each letter if I wanted. Envelope Distort will sometimes create odd distortions of your type. Mark is a design veteran with 20+ years of experience. In addition to his full-time art director job, he’s a contributing designer at Letterhead Fonts and can regularly be found pushes pixels on a variety of side hustle projects. You can see more of his work on Instagram and at Letterhead Fonts.