LOVESTRUCK, or Can’t Get Enough of Your Font, Babe! I have a confession to make.

I have a problem with fonts.

I can’t control myself. I want all the fonts.

My obsession started in the early 1990s, when I got my first Apple computer and my first grown-up job working in graphic design for a corporate bank in Manhattan. I’d buy collections of clip art and type the way other people buy shoes or watches. When the internet came along, so too did web sites dedicated to type, and my condition worsened.

I suppose the core of my affliction is the belief that any problem can be solved with just the right font. Today the right font is only few clicks away. I was lucky to be born when I was. Typography hasn’t always been this easy. 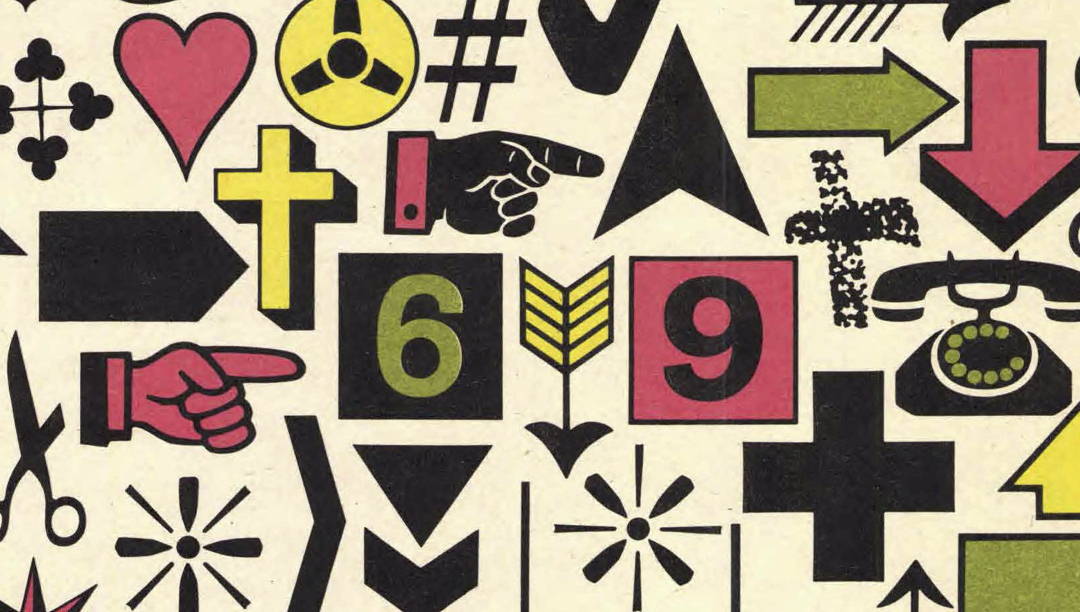 In the period between when cast lead type was arranged by hand and today, where a half a million fonts (the actual estimate) are as close to your computer as your PayPal user name and password, there was a golden age for type: the 1970s!

Despite being an exciting time for the designers of letters and characters, the 1970s was a tough time for the end users of letters. A designer with an assignment had three choices when it came to lettering: use a typesetting service, use dry transfer letters, or letter your work by hand.

Maybe it’s my peculiar font-based condition, but those three prospects make my blood run cold. However, if you’re brave enough to continue, let’s look a little more at those options.

The typesetting service was a distinctly 1960s and 70s enterprise. Starting in the late 1950s and accelerating through the 70s, setting type shifted from a hot metal process to a “cold,” photomechanical process.

Once exposed and photographically processed, the resulting strips of paper covered with text were often waxed (literally) and “pasted up.” The wax allowed for the copy to be picked up and moved around. Using actual paste on your paste-up meant that you really couldn’t move it once the glue dried. Think about that next time you move a block of text around in InDesign or Illustrator.

Cold type was a revolutionary step forward, but we know the story doesn’t end there! The advent of the PC and the development of the Adobe Postscript font language in the 1980s unleashed an explosion of type production and dissemination undreamed of. 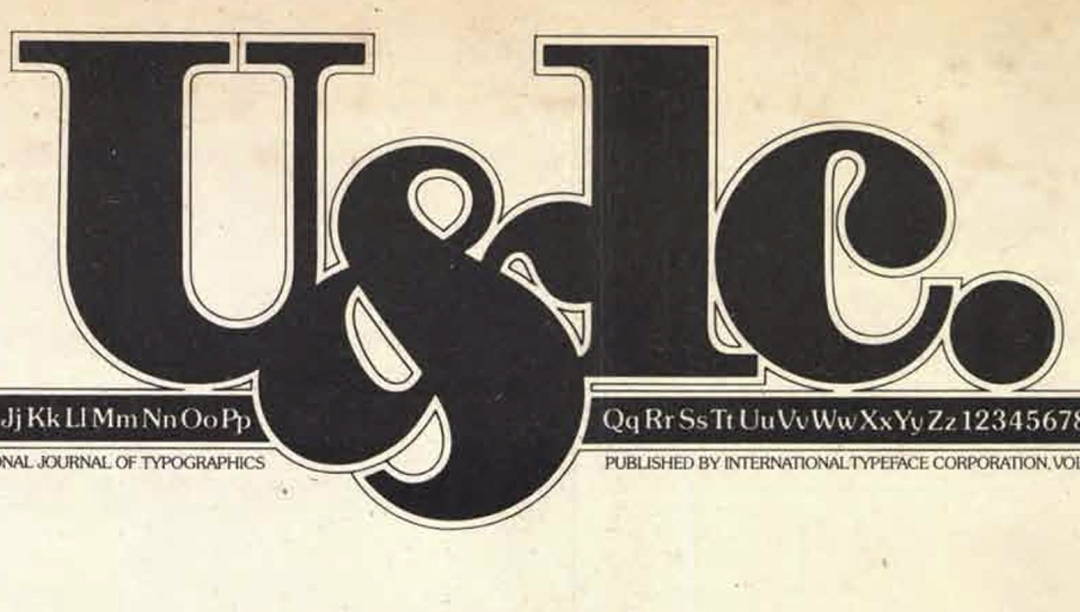 Upper and Lower Case, the International Journal of Typographics

Under the editorial and design direction of maverick designer Herb Lubalin, U&lc. was filled with wildly creative typography-based designs, cartoons and tons and tons of advertising featuring type specimens. ITC used U&lc. to promote their new or upcoming typefaces to typesetters.

More varieties of type meant more business for the typesetter. Are you a type nerd? Look no further than U&lc. While not in the public domain, one can find PDF scans of U&lc. online.

If you find a better source, please let me know. And I’ll do likewise. Regardless, take a look at U&lc. for page after glorious page of pure 70s typographic design of the highest order. 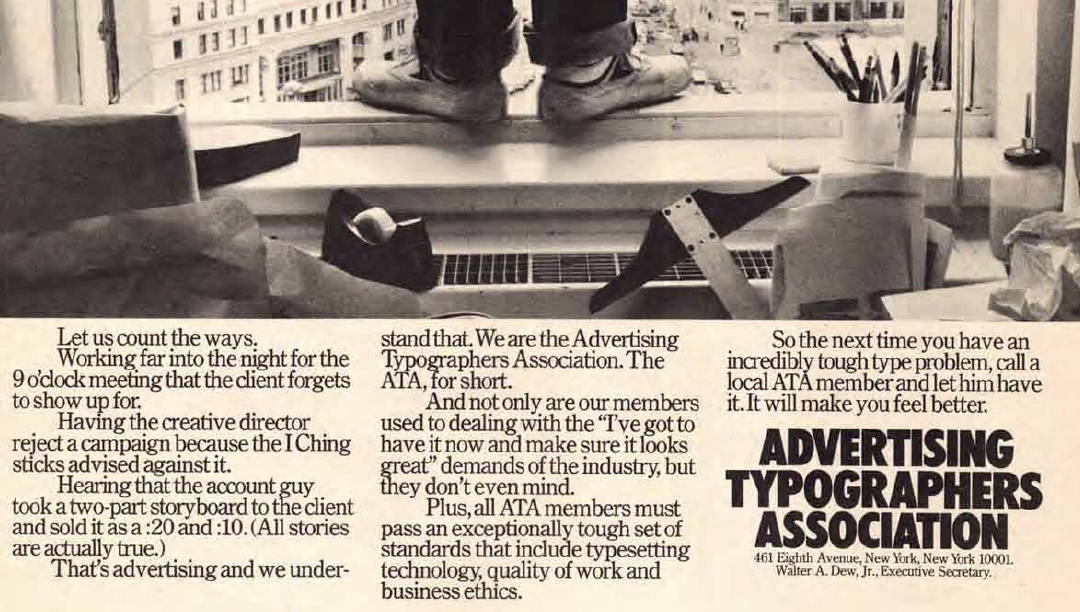 Advertisement from the pages of U&lc.

Upper and Lower Case was all about selling typefaces to typesetters, but typesetting was expensive, and sometimes simply unavailable, depending on where you were located. As a result, dry-transfer lettering was a good plan B for the 1970s designer.

Made famous by the manufacturer Letraset, dry-transfer sheets were sold in any good art supply store. You can still find vintage 70s Letraset sheets, but they are rare and sold on eBay from dwindling supplies or you can use a digital emulation of the effect like TransferTone.

In their day, designers, with their long hair and bell-bottom pants, would peruse available stock and purchase sheets of letters in the typeface and the size they wanted. Using dry transfer letters consisted of carefully lining the sheets up and then burnishing the letters, one at a time, onto the art work.

Obviously, creating text of any length using rub on letters was impractical (verging on the nerve-wrackingly impossible). However, in display or headlines or even in logos, rub-on letters allowed for a professional looking result. Dry transfer still exists (you can get Chartpak brand letters on Amazon), but the primary use of dry transfer in art today is in the field of manga.

Halftones and other comic book elements are produced as dry-transfer sheets and sold in art supply stores. Foreign comic book artists who happen to visit Japan often make a stop to buy these transfer tones in what has become a ritual for comics making enthusiasts. 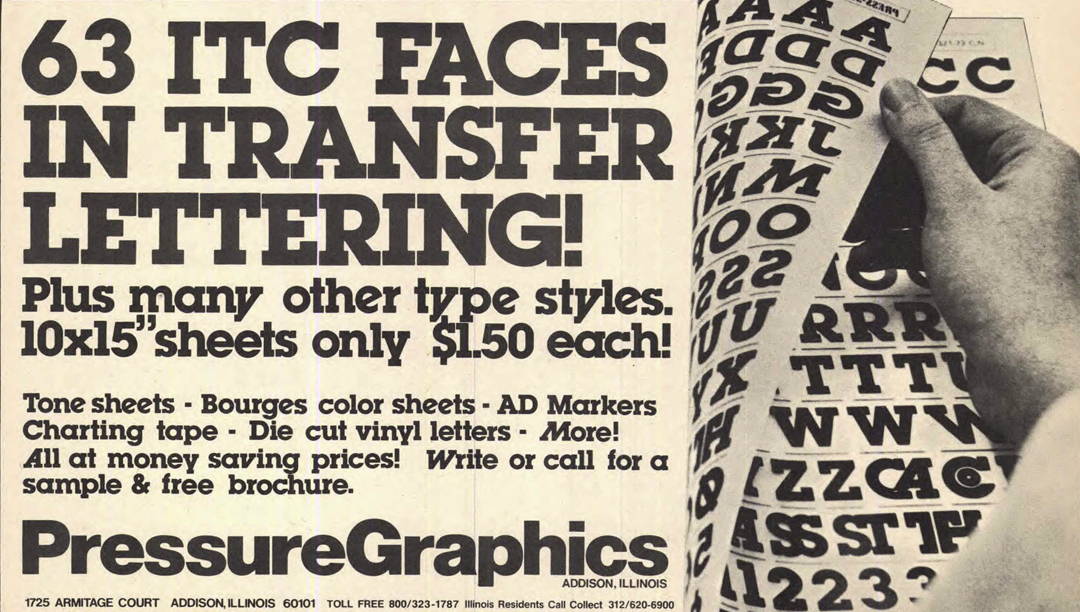 Advertisement for dry transfer lettering from the pages of U&lc.

In 2021, if you see some cool design, you might ask the designer to ask where they got that font. On Instagram, folks are constantly sliding into my DMs to ask me where I get my typefaces. By contrast, the really remarkable examples of typography you’ll find in 70s design was probably rendered by hand.

Once a vocation that was the result of training, the art of hand lettering was nearly completely extinguished by Postscript. Hand lettering as a craft, though, has experienced a resurgence in recent years. One can see this as a somewhat natural cycle, where old ways are eclipsed by the new, and then the old is rediscovered and rescued by a subsequent generation.

Back in the day, the sign painter was a craftsperson, working alongside wallpaper hangers and carpenters. Now, the hand letterer is an artisan, along the lines of the craft brewer or your beard barber. 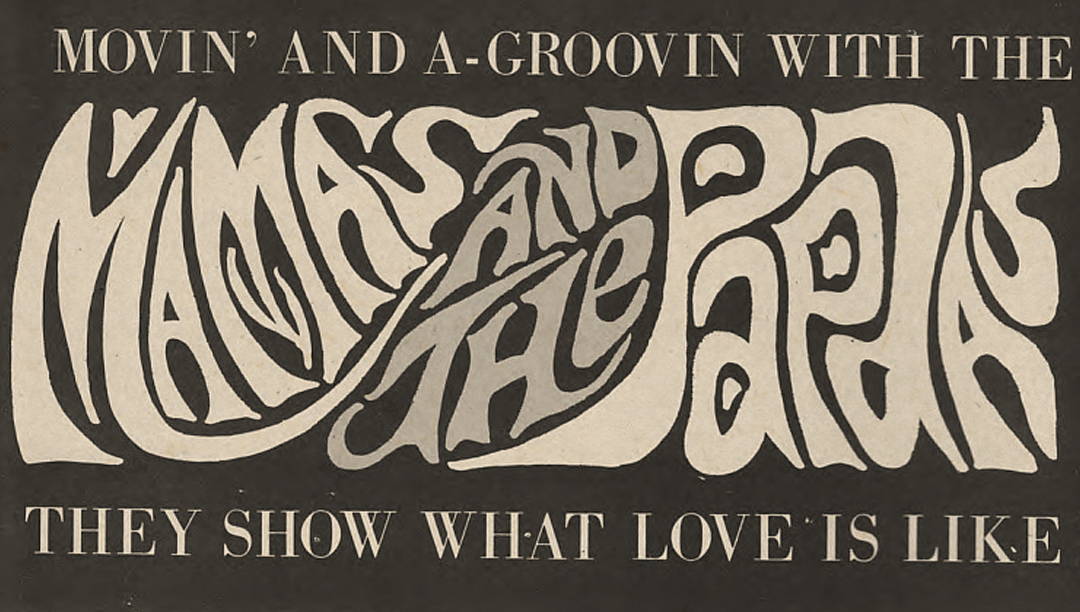 The best typography of the 1970s was custom-made. It takes that same skill and inspiration to make fonts today, but here is where a mania for fonts pays off.

Lovestruck captures the look of 60s and 70s hand lettering 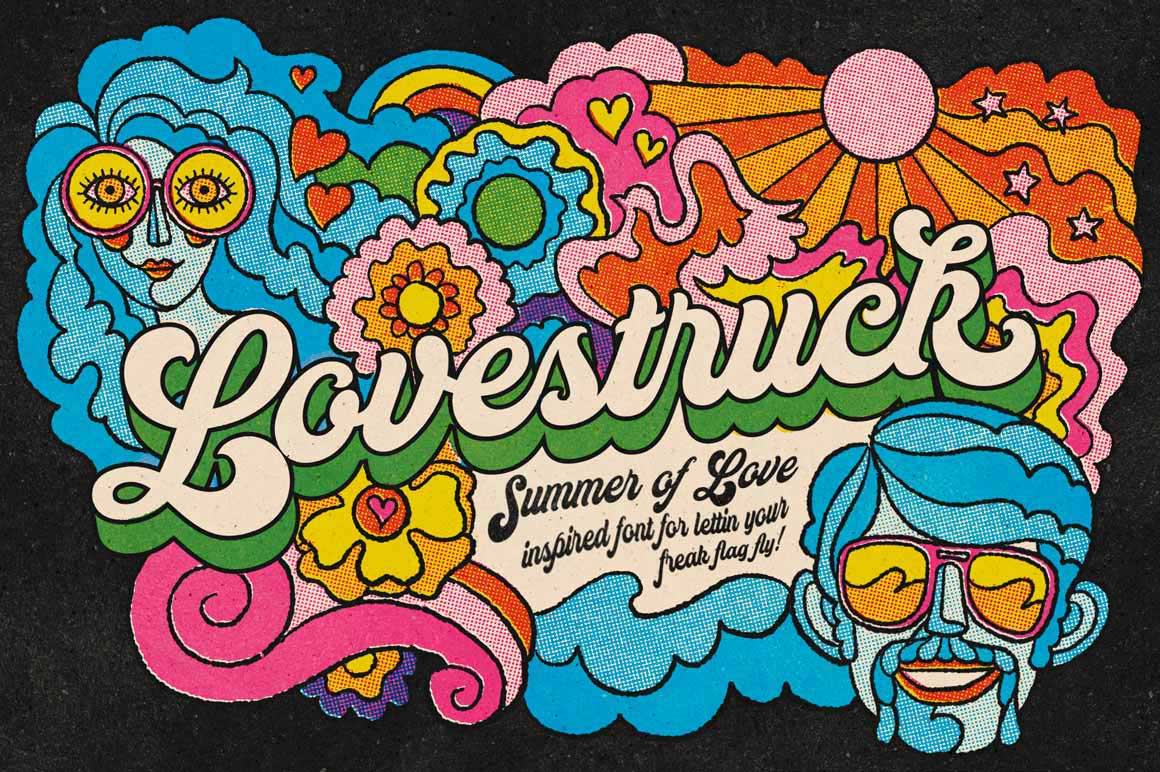 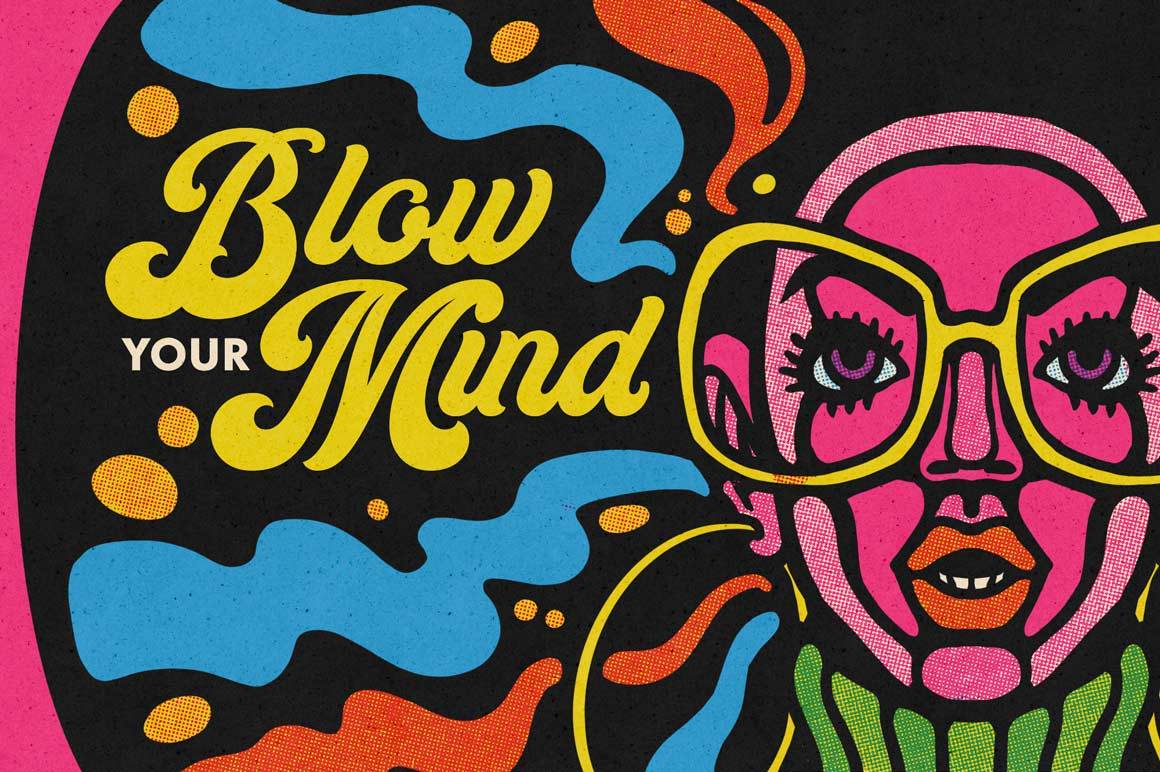 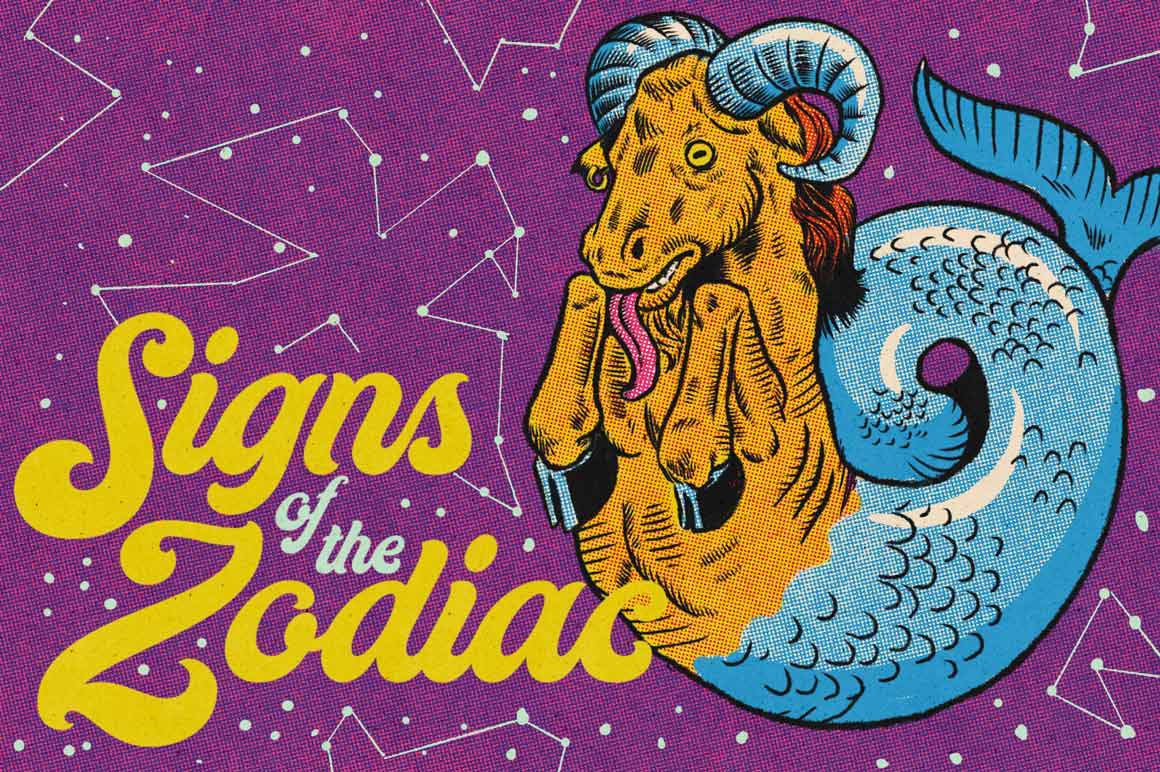 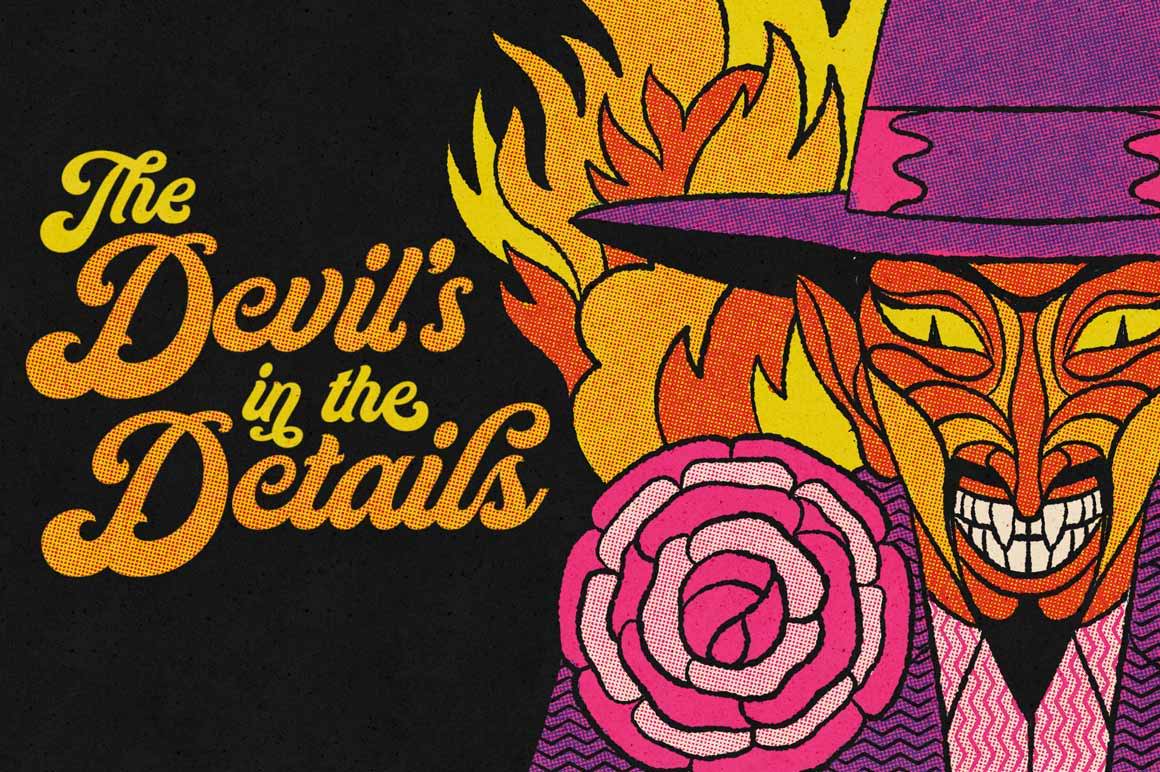 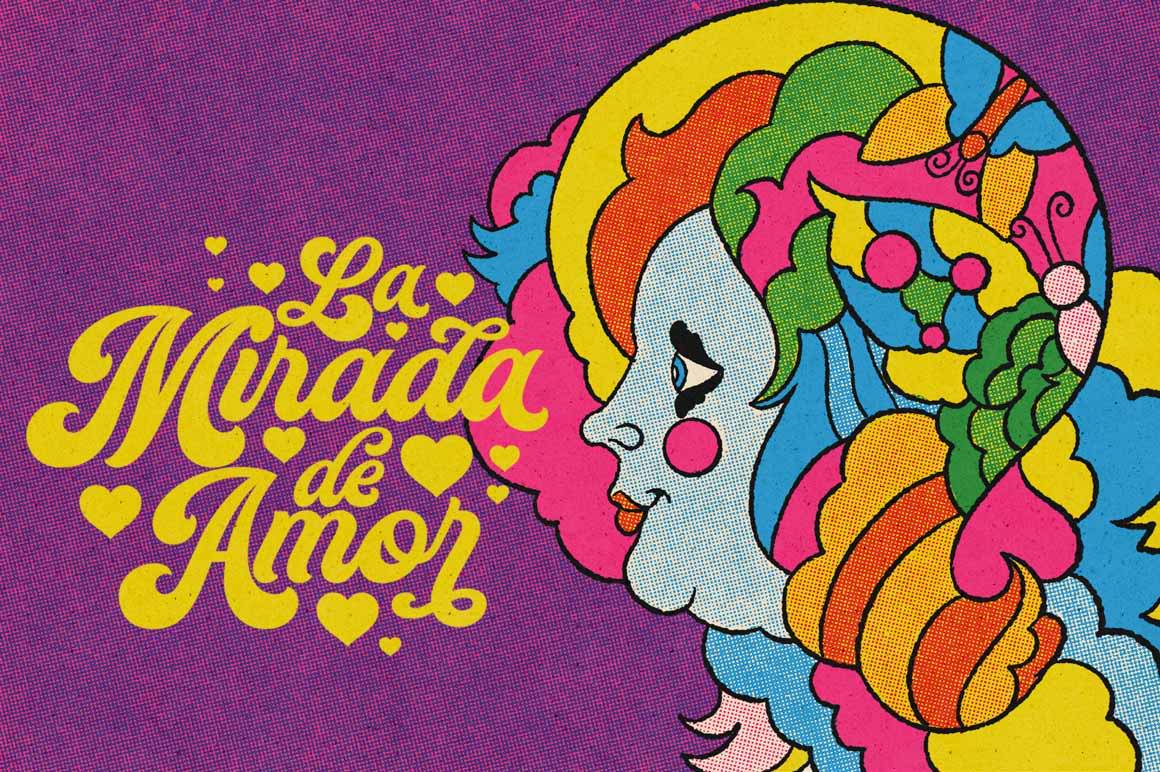 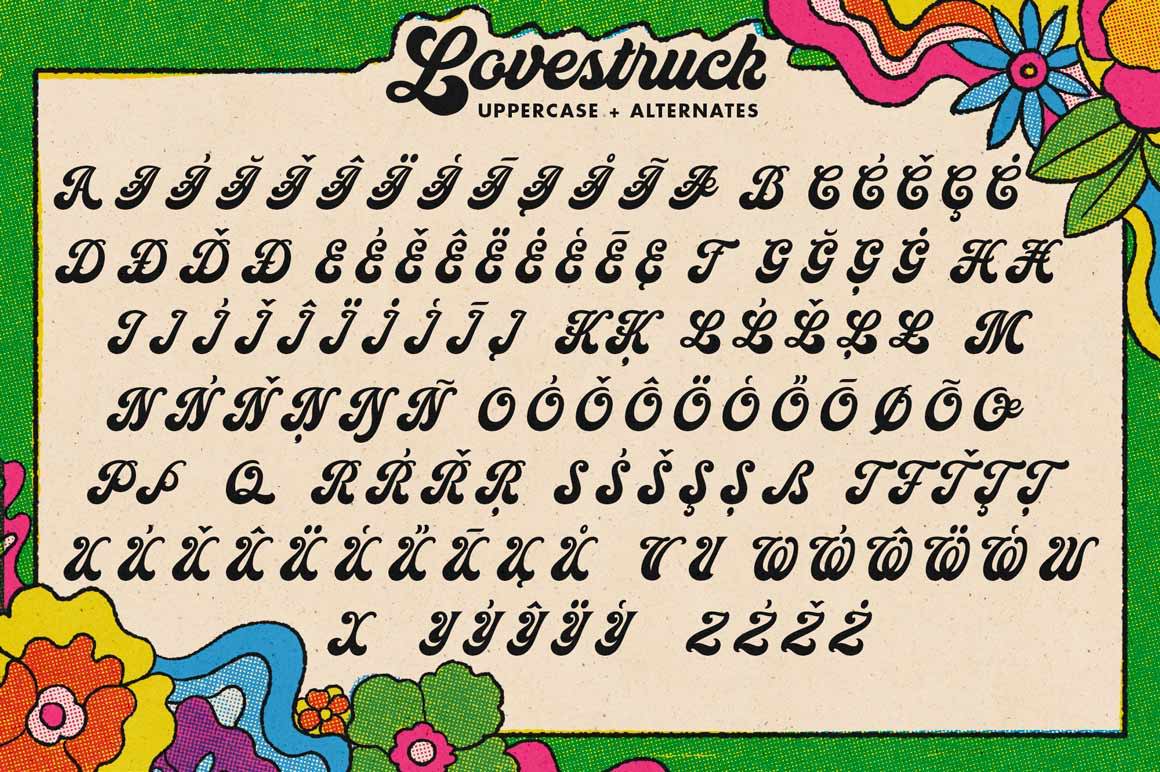 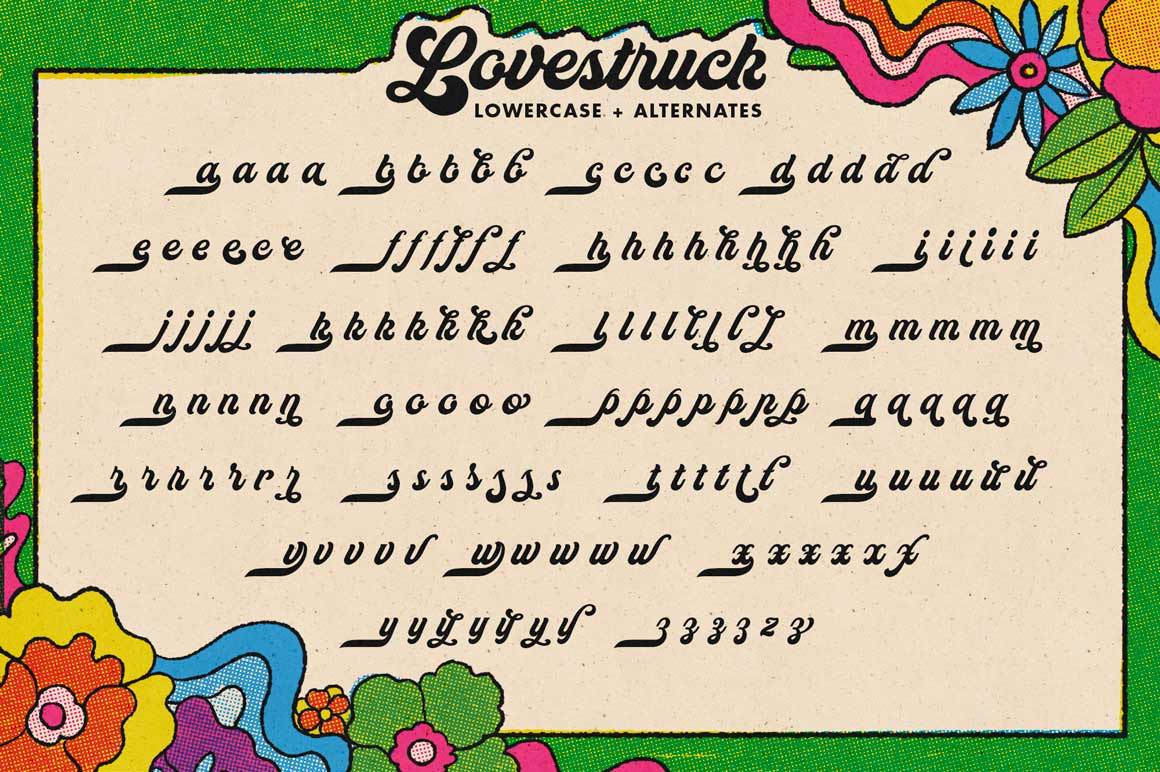 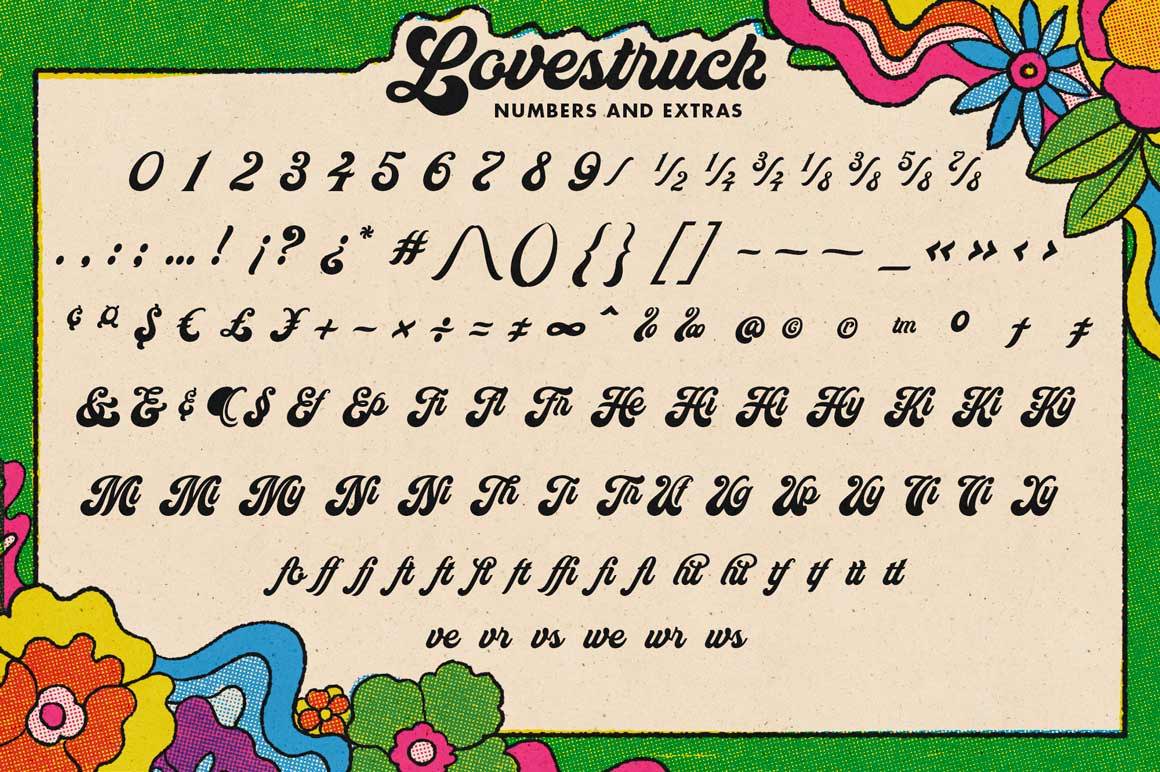 The skill and hard work that the author invested in making LoveStruck is like a genie in a bottle, or money in the bank for the designer.

At the right moment, you can simply summon LoveStruck in all its glory, and turn loose all of that captured grace on their work. Months of painstaking work is subordinated with just a few clicks of a mouse.

But as Spiderman’s uncle says, with great power comes great responsibility. Anyone can buy a font, but using it well is another story and, I hate to say it, a different article. 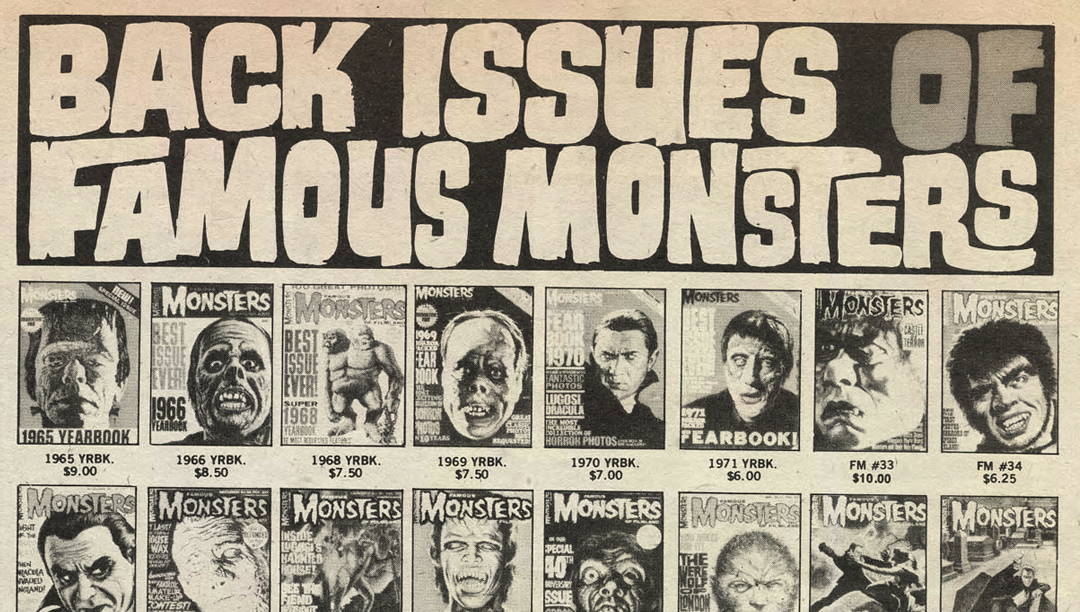 I’ll leave you with two heart-shaped boxes. Both are treasure-troves of 1970s inspiration!

Up first is Dracula magazine. It’s about the most 1970s thing I’ve ever seen -- and I lived through the 70s! Originally produced in Spain, a limited number of issues were reprinted in English. While the use of typography in Dracula is disappointing -- it’s always a problem when translating comics into different languages to also translate the hand-lettered logos and title texts -- it’s no less a (blood) feast for the eyes.

While the (British) English edition didn’t last long, parts of Dracula did make its way to the United States, thanks to Warren Publishing. Warren Publishing printed comics in a magazine format that allowed it to skirt the industry-imposed censorship of the Comics Code Authority. As a result, the content of Warren’s magazines was of a more adult nature and featured work by European comic artists.

Here is the second heart-shaped box for you. As a result of going bankrupt, much of the Warren Publishing back catalogue is available online, for free, now. Not only can you look at limited issues of Dracula, you can get lost in an ocean of unfiltered 1970s comics and pop culture magazines.

These pages are flowing with hand lettering, amazing drawing and groovy layouts. Brace yourself, though. You’re going to be Lovestruck. 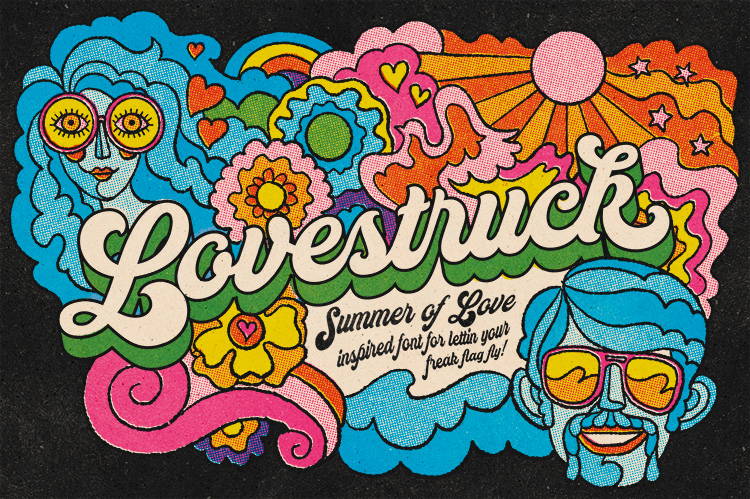 Travel back in time

With Lovestruck, a script font inspired by flowy freeform fonts and lettering from the 60s and 70s. Made in Open Type with over 600 glyphs for freedom in a font you're going to love.

Christopher Sperandio is an artist, writer and university professor. In 2015, he founded the Comic Art Teaching and Study Workshop at Rice University, where he teaches art and comics.

Pinko Joe, Sperandio’s first graphic novel, was published by Argle Bargle Books in 2020 and called “laugh out loud hilarious” by Broken Pencil Magazine. Volume two of this series will appear in 2021 via arglebarglebooks.com. Follow Sperandio on Instagram, Twitter, or visit his website.

Take a look at other ARTICLES by Christopher Sperandio