Look at me! I’m the Cap’n now! A shallow dive on brand mascots As a child in the 70s, I got my information one of three  ways. Either watching TV, mostly cartoons, watching the commercials aired between the shows — mostly commercials advertising sugary cereals hawked by cartoon characters, or off the back of the boxes of the aforementioned cereal.

The proper way to eat your breakfast was to glue your eyes to the cereal box as you mechanically shoveled in spoon-full after spoon-full of sweet flakes, puffs, or wafers, reading and re-reading every square inch of the box until you were finished eating. 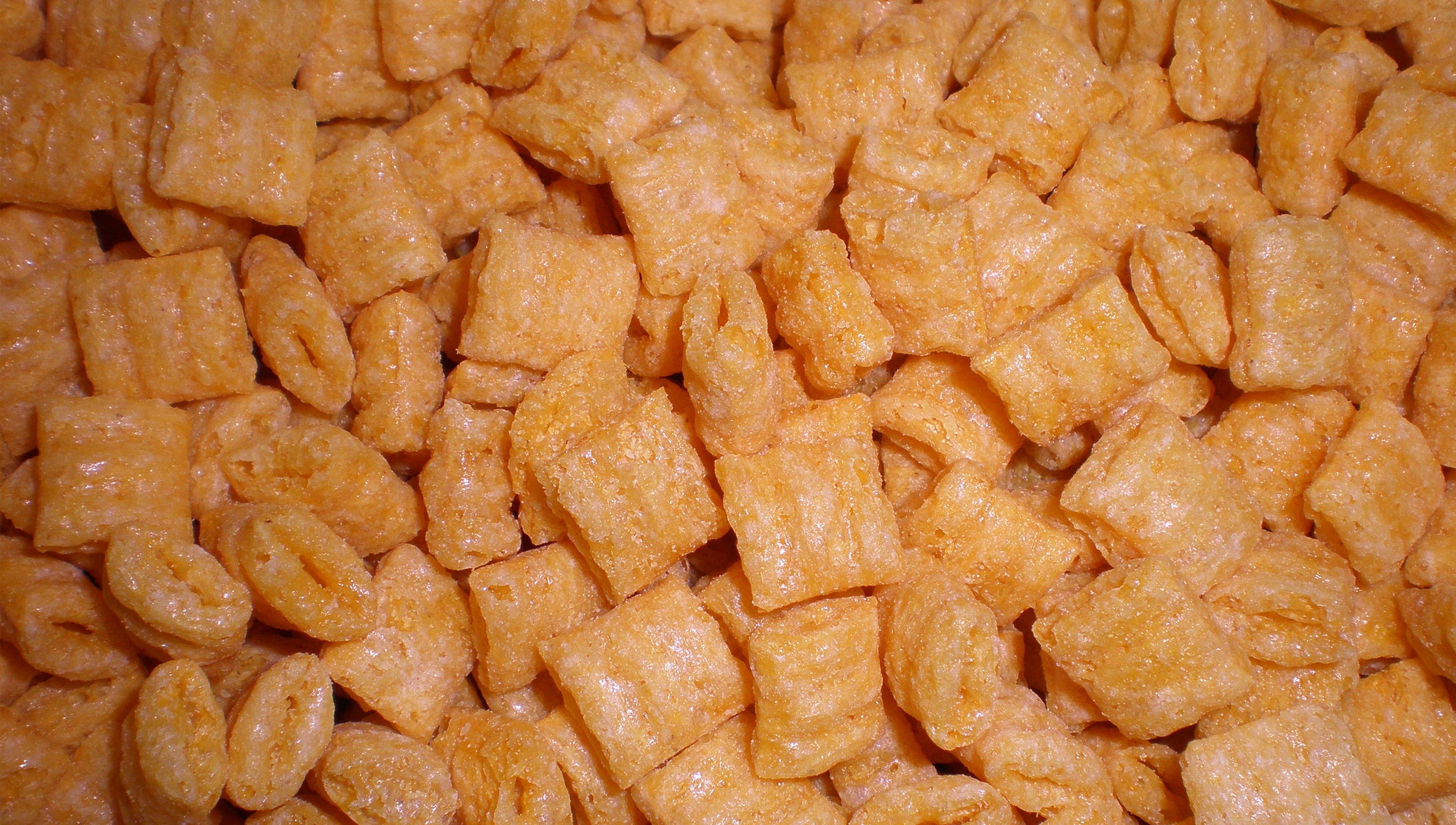 The origin of Cap'n Crunch

Launched in 1882, the Quaker Oats man was the first (according to the company) branded cereal mascot.

We now know that oatmeal is a super food, but in the 1960s and 70s, that dreary, white-haired Quaker with his bland, tasteless paste couldn’t compare to something called “Crunch Berries.”  The captain of breakfast was literally a captain — well, Cap’n. 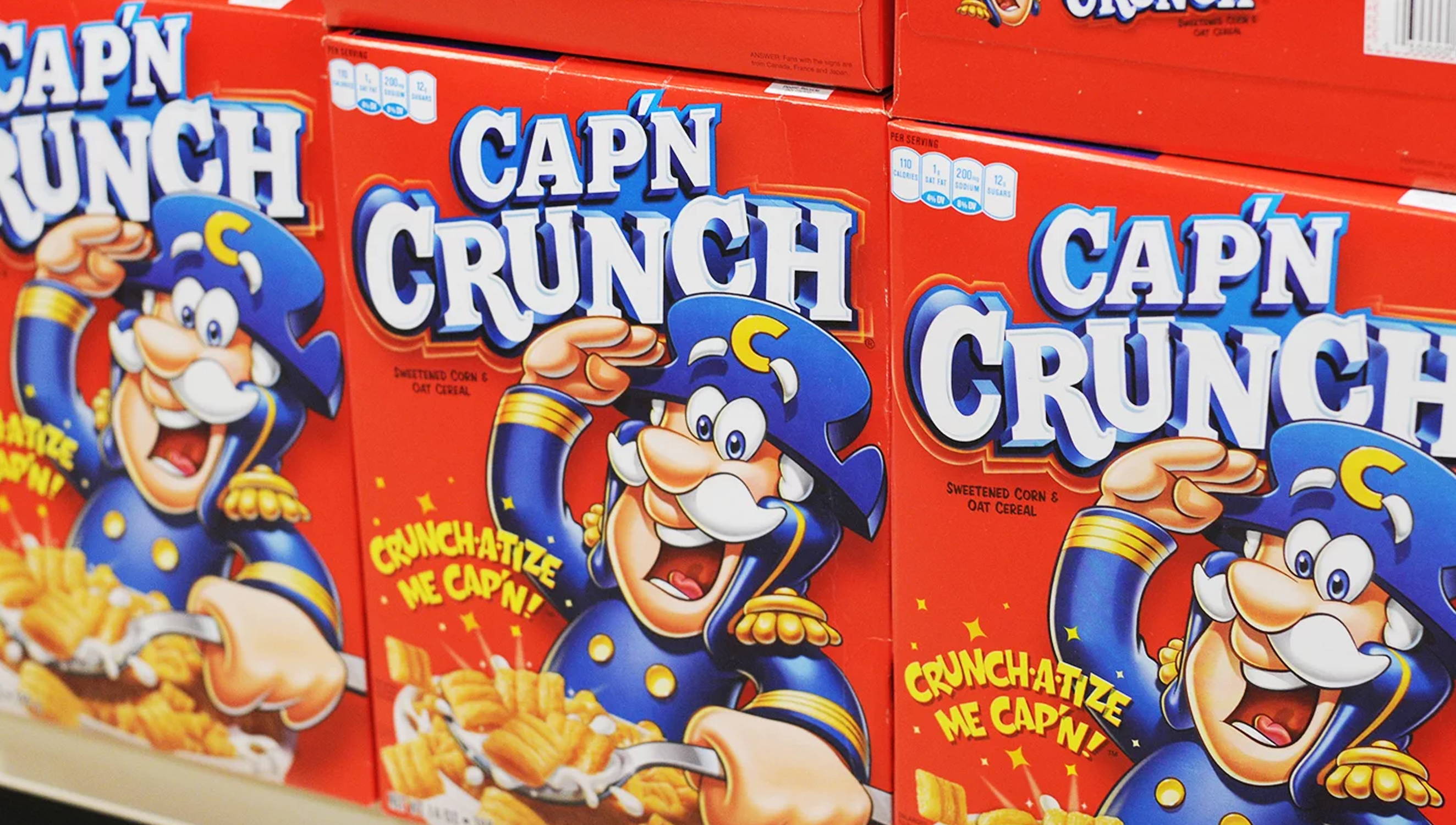 Cap’n Crunch, a product line of corn and oat cereals manufactured by the Quaker Oats Company, a division of PepsiCo since 2001.

81 years after the birth of the Quaker Oats man, Cap’n Crunch was introduced in 1963. According to company lore, the chief complaint from children about breakfast cereals was that when combined with milk, they quickly became soggy.

A General Mills chemist came up with a formula for making a breakfast cereal that “stays crunchy even in milk.” This new formulation called for a change in marketing for breakfast cereals.

Cap’n Crunch, mustachioed and in his bicorn hat, was created as the namesake of the new product. The character on the box was also the content of the box. This may seem like a small distinction, but it had a knock-on effect.

Character branded cereal became de rigueur. It’s now common for Americans to have toads, monkeys and even apples with mouths for breakfast. 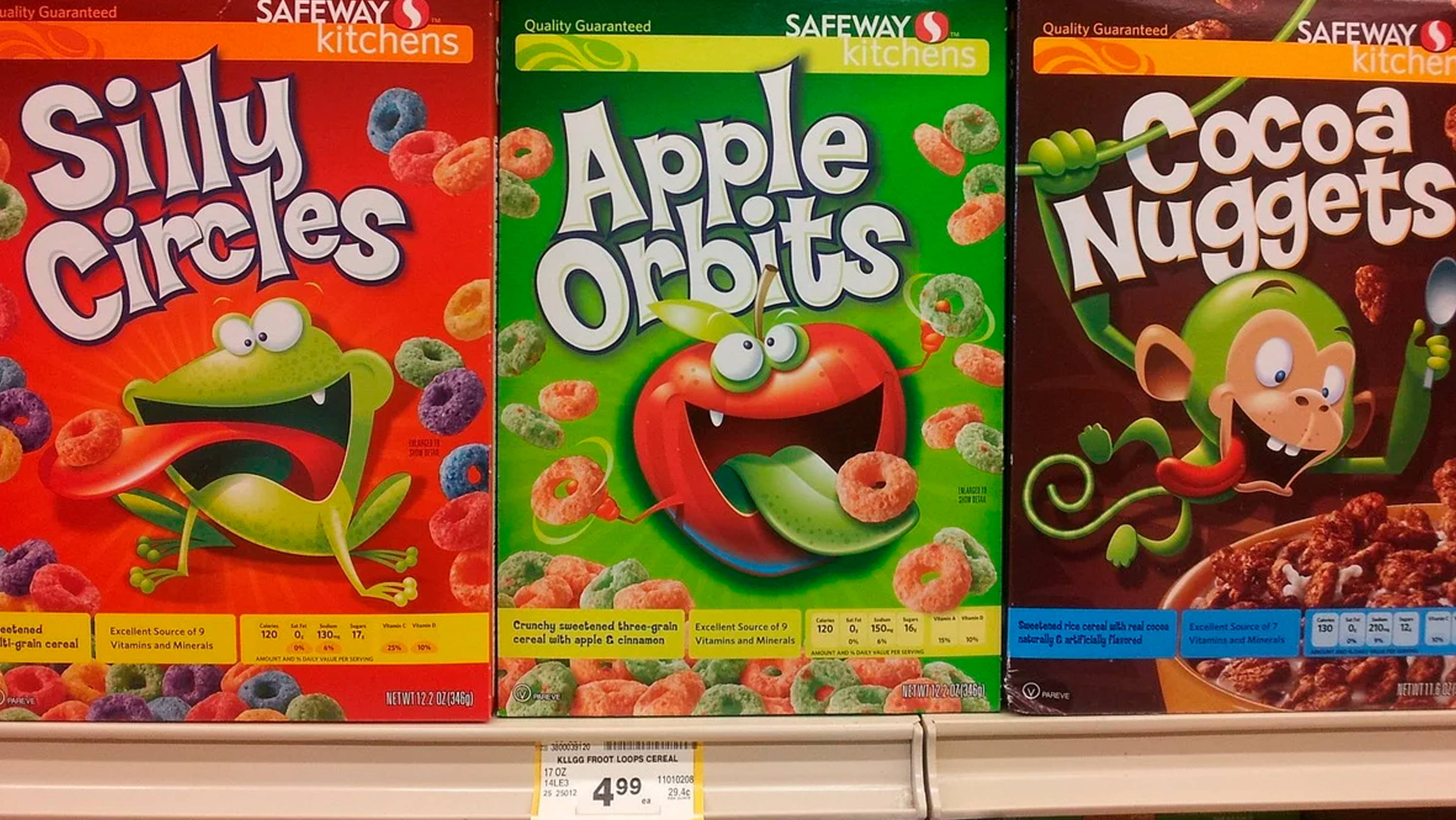 Television advertising was part of the product from the beginning. The man tasked with bringing the Cap’n to life was born with the name Joseph Ward Cohen Jr., but known professionally as Jay Ward. He was the creator of Bullwinkle J. Moose.

When animation for TV first appeared, it was limited due to production schedules and cost. As a result, TV cartoons were looked down upon, and compared unfavorably to animation made for the cinema.

However, Jay Ward fought back against this unfair comparison by making his shows extremely clever. The animation may have been limited but the humor was not.

General Mills was a sponsor of Ward’s “Rocky and Bullwinkle Show,” and came to him to create a string of animated commercials for Cap’n Crunch. The results were unlike any other breakfast cereal commercial, and Cap’n Crunch flew off the shelves.

Want to learn more about leveraging a lo-fi illustration style in your work? Check out this article on the tasty use of halftones.

If you’re a fan of the original Rocky and Bullwinkle, I highly recommend streaming one, or a few dozen, Cap’n Crunch commercials. My favorite is when the Cap’n and the crew of the Guppy do their best take on Gilbert and Sullivan’s Pirates of Penzance. 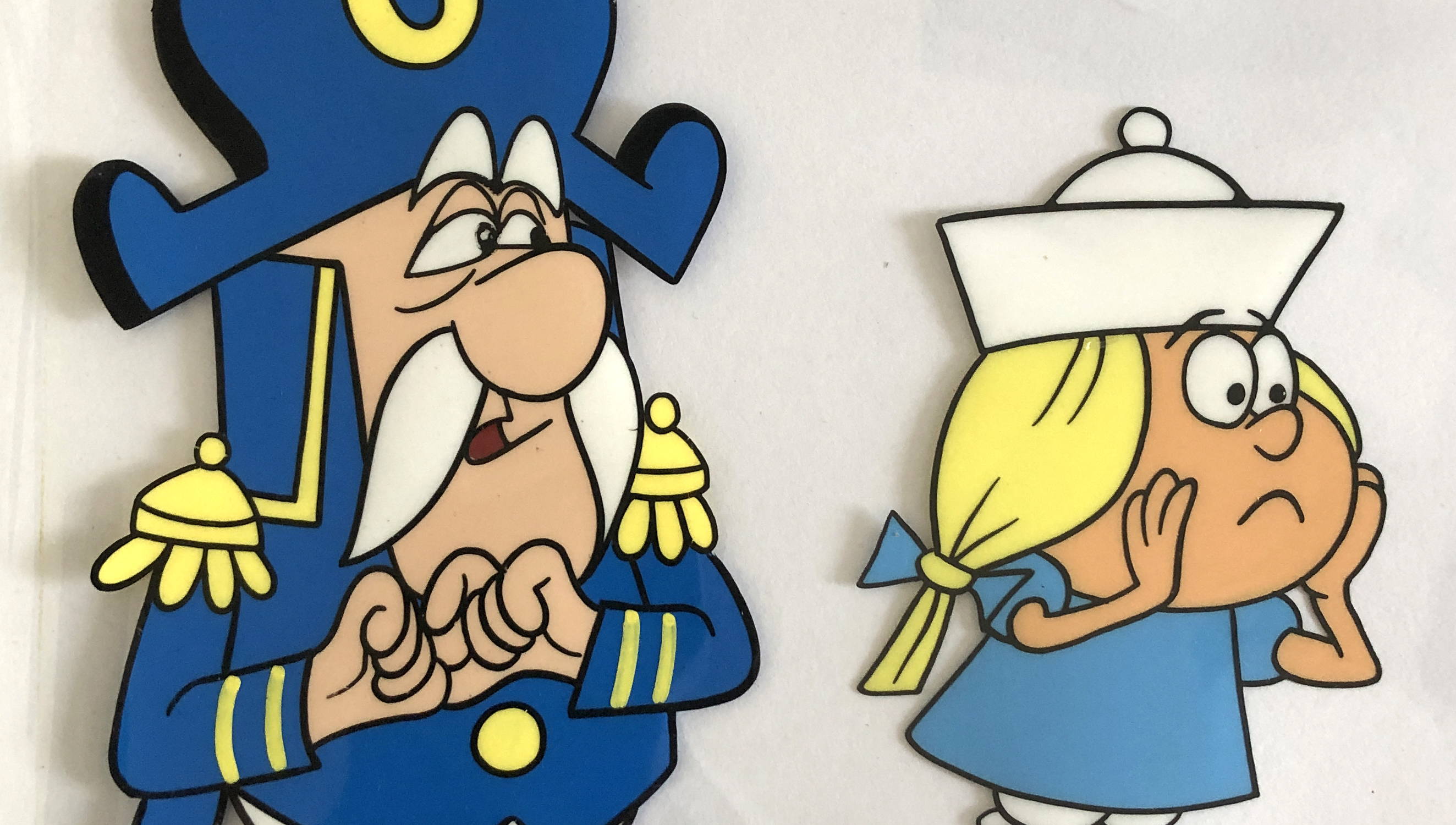 It’s great for breakfast or even lunch, no amount of milk will make it lose its crunch

(no amount of milk will make it lose its crunch)

So all ashore that’s going ashore

Get Cap’n Crunch at your grocery store

The efficacy of the efforts can be demonstrated by the character’s (and cereal’s) longevity. Fifty years after his introduction, Cap’n Crunch shows no sign of slowing, even scoring an article about him (thanks to some clever marketing) in the Wall Street Journal.

“According to his official biography, Cap'n Crunch, whose full name is Horatio Magellan Crunch, was born on Crunch Island in the Sea of Milk – "a magical place with talking trees, crazy creatures and a whole mountain (Mt. Crunchmore) made out of Cap'n Crunch cereal." It remains unclear if Crunch Island is part of the United States.”

Setting aside the obvious negative health effects of feeding children pure sugar, there’s also the mental impact of developing a close bond with these cartoon mascots.

Shocking and hilarious, if somewhat dark, was the mid-90s send up of cereal box mascots in “The Cereal Killings,” a comic book series by artist/writer James Sturm and published by Fantagraphics Books. These comics showed the  brand identity underbelly.

“The Cereal Killings” has never been reprinted. You can hunt down individual copies or write Fantagraphics Books and tell them it’s time to collect the series into one volume. 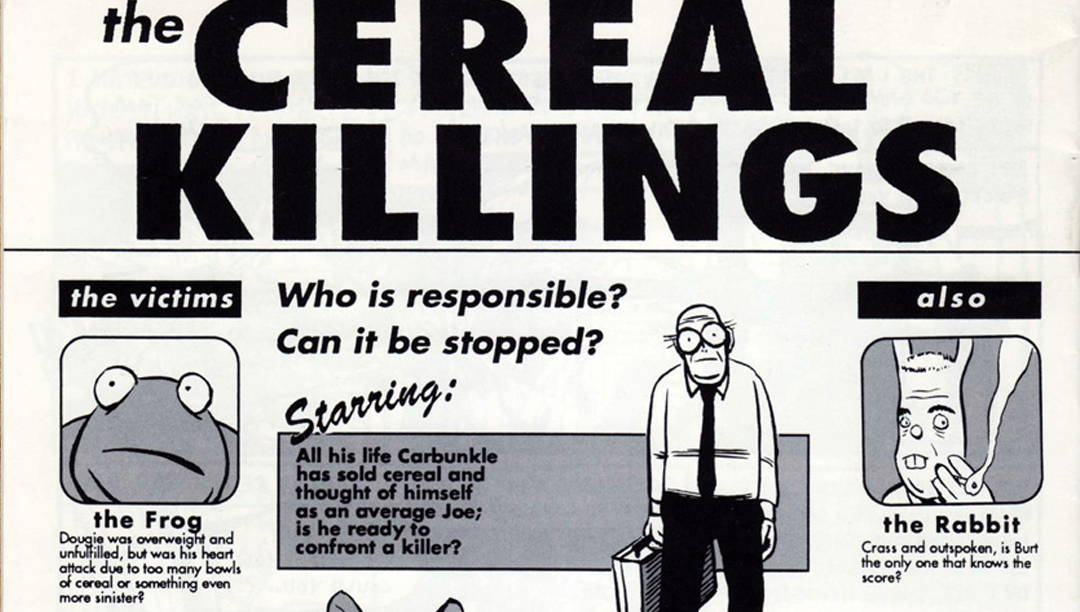 Detail from the back cover of issue 3 of The Cereal Killings.

Of course, brand mascots aren’t limited to cereal. My favorite non-cereal brand mascot is probably Reddy Kilowatt, an early advocate for a private electrical grid, thousands of pieces of clipart of Reddy were made available to the companies that licensed his image in the Reddy Kilowatt Art Service Reproduction Proofs Book.

These books, loaded with vintage “Reddy” clip art, sell at auction for over $1,000. With his lightbulb nose and lightning bolt arms, Reddy’s design was, pardon the pun, electric. 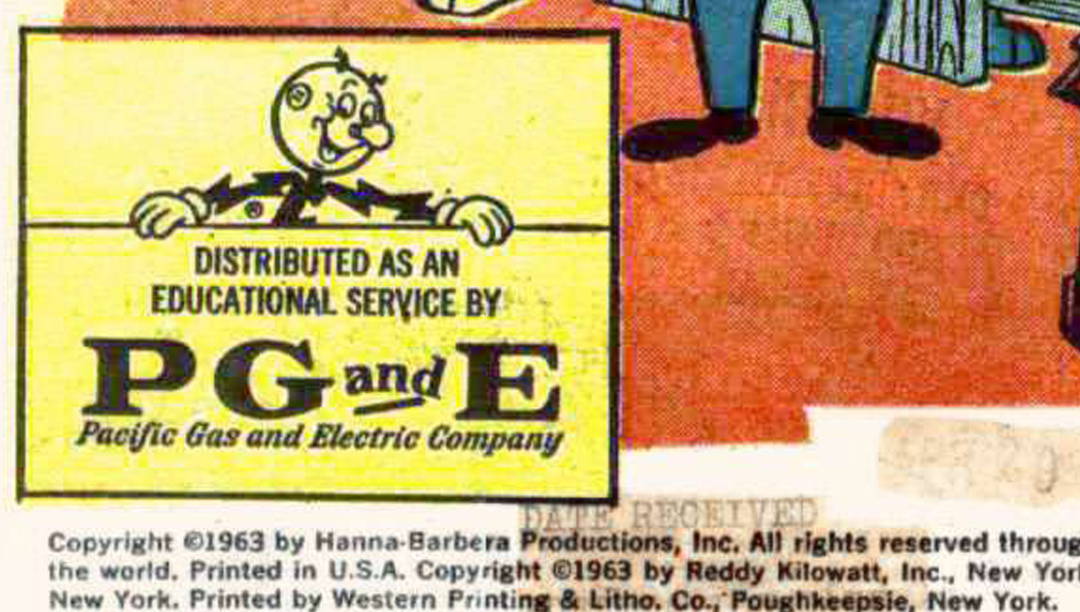 Reddy Killowatt was licensed to many regional electric providers.

The Michelin Man dates from 1894. More than one hundred years later, he played the heavy in a William Gibson novel. If you love branding and near-future science fiction, I highly recommend Gibson’s “Pattern Recognition.”

It’s a thriller set in the context of “cool hunting,” which was a very cool topic in 2003. In the book, the protagonist is allergic to advertising, and has violent reactions to being confronted with brand mascots, most notably, the Michelin Man. I can identify.

The US Post Office introduced Mr. Zip (Zippy to his friends) in 1962 to help the public understand the then new concept of zip codes. Mr. Zip is frightening to behold. Or at least, as a five-year-old in the post office with my mother, I remember being terrified of a life-sized cutout of Mr. Zip leering at me from behind the counter. 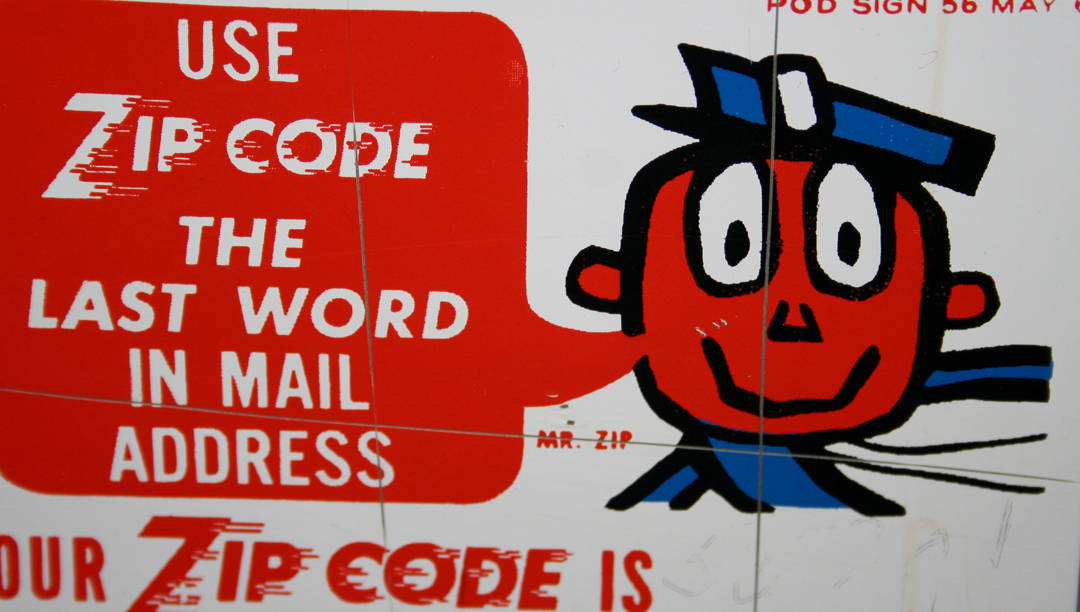 Mister Zip. The stuff of nightmares.

The world is littered with brand mascots. So many that it’s impossible to catalogue them all. Their effect, however, can be measured personally.

For me, Cap’n Crunch is THE brand mascot and his cereal box is a gateway to a 4-color world. I would fill myself with sugar as I meditated on the utopia that was just on the other side of that box. To my mind, the box, not the commercials and not the cereal, is the real product.

Made from printed glossy paper glued to chipboard, once the box arrived in the home, it quickly became battle damaged. Endless were the struggles over first rights to rip open the package in search of the toy prize included inside.

While we can’t get our childhoods back, thanks to RetroSupply, we can simulate the damage endured by cereal boxes. All it takes are a few brushes, a paper texture and the knowledge of how to make a layer mask.

Much of the work that I post on Instagram lately has an aged look to it -- and I’m asked about it almost constantly.

The answer is with the right brush, anything is possible. I use Retro Effects Classic Collection Bundle. The way I use them may not be the way other people use them, but it’s what I do.

The trick is to be conservative with your fakery.

Chew your art cereal quietly. As a wise Cap’n once said, “You can’t get away with the crunch, because the crunch always gives you away.”

Take a Look at More Articles by Christopher Sperandio

Christopher Sperandio is an artist, writer and university professor. In 2015, he founded the Comic Art Teaching and Study Workshop at Rice University, where he teaches art and comics.

Pinko Joe, Sperandio’s first graphic novel, was published by Argle Bargle Books in 2020 and called “laugh out loud hilarious” by Broken Pencil Magazine. Volume two of this series will appear in 2021 via arglebarglebooks.com. Follow Sperandio on Instagram, Twitter, or visit his website.